Winning in the rain: the 2019 MJA Awards 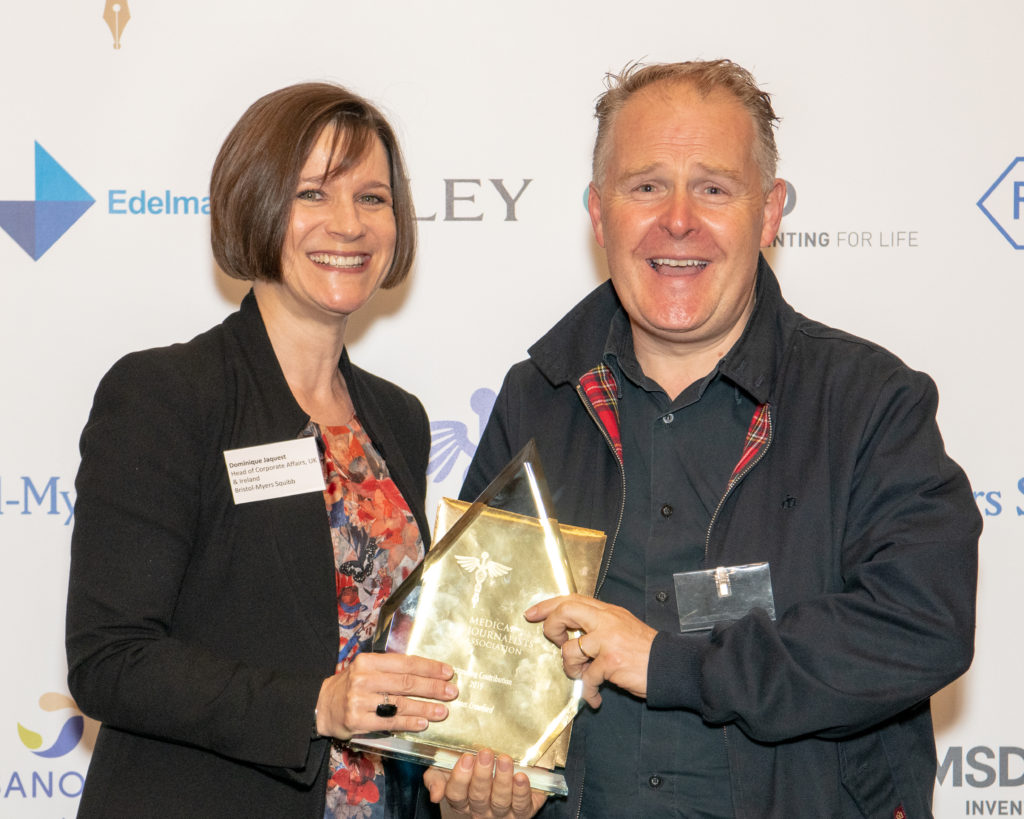 Torrential rain could not dampen enthusaism for our annual celebration of excellence in health and medical journalism — the MJA Awards.

This year our highest accolade, the Outstanding Achievement Award, was won by Angus Crawford and Tony Smith.

The pair also picked up the trophy for Mental Health Story of the Year, for their incredibly powerful piece Instagram helped kill my daughter, which was broadcast on BBC Six O’clock News.

Judges praised the “skilful and sympathetic portrayal of an intensely moving story of a family’s loss, which challenges the power of social media and the urgent need for tech giants and the Government to face up to their responsibilities.”

Dominique Jaquest, Head of Corporate Affairs UK & Ireland for Bristol-Myers Squibb, our principal awards sponsor, presented Angus with his trophy and £1,000 cash prize, at the awards ceremony at the Barber-Surgeon’s Hall in the City of London. 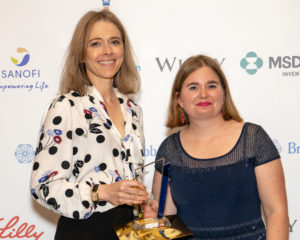 Editor of the Year went to Justine Hancock, editor of the Daily Mail Good Health section.

“The campaign which highlighted the scandal of the use of vaginal plastic mesh for stress incontinence which damaged so many women came to fruition with a national inquiry and has now widened to include men undergoing hernia surgery.

“Her continued coverage of pill dependency and the risks of opioid painkillers won praise from the Public Health Minister. 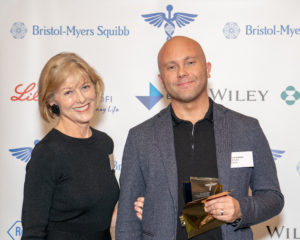 There was a new award this year, the Dr David Delvin Award for Sex and Sexual Health Journalism, which was presented by David’s widow, Christine Webber.

David was a former Chair and Vice Chair of the MJA and a committee member for more than 40 years.

When he began his media career as a newly qualified doctor in the 1960s, any doctor writing for publication risked exposing themselves to GMC scrutiny for ‘self- advertising’. Most doctors were justifiably afraid about either talking to journalists or writing for newspapers or magazines.

But David was adamant that doctors should not be compelled to write under the cloak of pseudonyms, and he played a pivotal part in freeing up communication between medicine and the media.

He wrote on every medical topic you can think of. But he specialised in sex, relationships and sexual medicine — so it is fitting that his name and his work live on in this new award.

The high calibre of entries gave judges a difficult task, but the winner was Buzzfeed LGBT editor Patrick Strudwick for  This man became HIV-positive aged 16 when he lost his virginity. So he wrote a play about it.

And the other winners were: 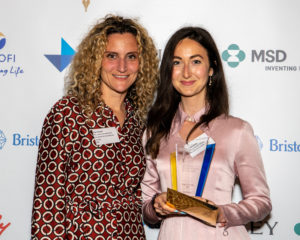 Blogger of the Year was won by Eve Simmons, Deputy Health Editor of the Mail on Sunday, for her posts on Not Plant Based, the website she co-founded with Laura Dennison.

Judges thought, “this was everything a blogger should be: irreverent, energetic and knowledgeable and above all factually accurate”. They said is was well presented, in a chatty informed style.

Charity Writer or Broadcaster of the Year went to Craig Brierley, University of Cambridge for Why we just can’t stop eating, which judges described as “beautifully produced”. They Craig’s piece “made a difficult topic easy to understand. It explained the subject in depth but was still accessible.”

Regional Reporter of the Year went to Jonathan Gibson, BBC Birmingham for Opioid addiction which was broadcast on Inside Out.

Judges said this piece clearly took a lot of time and effort to deliver. It was investigative journalism at its best. Captivating to watch and a nice local spin on a national story.

Geraldine Scott, health correspondent, Eastern Daily Press, was Highly Commended for Will hospice ever be built? Donations top £2m but goal may be impossible. 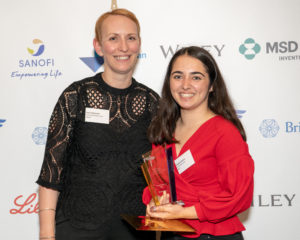 Newcomer of the Year — sponsored by Sanofi, was won by Elisabeth Mahase, deputy news editor, Pulse, for Revealed: the awareness campaigns that risk distorting clinical prioritie

Judges said this was a very well researched, detailed and informative investigation into a little-known area of health charity practice. Her story was backed up with a wide range of quotes and was well written.

The standard of entries for Mental Health Story of the Year was so high, that in addition to Angus Crawford’s win, two entries were  Highly Commended: Keith Cooper, senior staff writer, The Doctor magazine for Born of injustice and Geraldine Scott health correspondent Eastern Daily Press for Mental health watch campaign. 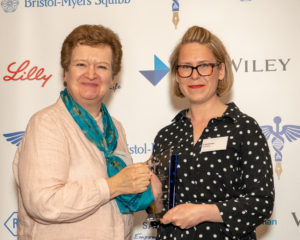 Freelancer of the Year went to Jo Macfarlane, who for three outstanding pieces FakeNews, HeartHealth, and Qureshi

Judges described Jo as at the top of her game. All three pieces were remarkable investigations and offered helpful and impactful information. 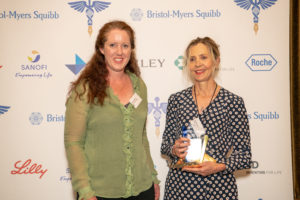 Case Study of the Year, sponsored by Lilly, was won by freelancer  Caroline Scott, for  How Felix, the little boy who loved life, is helping other children battle the cruel disease that stole him away at six, published in the Daily Mail, Good Health section.

Judges said this sensitively written and incredibly moving story conveyed the courage and suffering of a brave little boy and his family when he was diagnosed with neuroblastoma. Great human interest with the added legacy of Felix’s cells being used to develop new drugs to benefit other young patients.

Madlen Davies, health and science editor, The Bureau of Investigative Journalism was Highly Commended for Womb loss in Malawi: an unfolding tragedy. 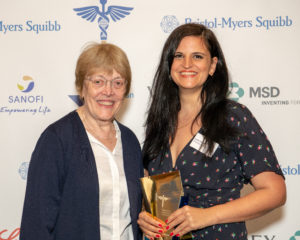 Samira Shackle, is presented with her trophy for Feature of the Year (specialist audience) by awards’ judge Christine Hancock, founder of C3 Collaborating for Health

Feature of the Year (specialist audience), was won by Samira Shackle, freelance: Violent crime is like infectious disease – and we know how to stop it spreading, published by The Wellcome Trust website, Mosaic.

Judges commented that it was refreshing to see a specialist feature winning wide pick-up in mainstream media. It was accessible to the general reader while retaining professional rigour.

Freelancer, Jonathan Gornall, was Highly Commended for How MESH became a four-letter word, published in the British Medical Journal. 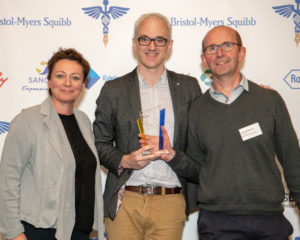 Feature of the Year (broadcast), was won by the BBC’s James Gallagher and Adrian Washbourne for The second genome.

Judges described this as “excellent, an absolute game changer for medicine. A great balance of science and humour with a wide range of contributors. Something that affects every single one of us.”

Judges felt Melissa Hogenboom, BBC Global News, deserved a special mention for the technical innovation employed in  What happens when you can’t trust your own brain?

Feature of the Year (general audience), sponsored by Wiley, went to Patrick Strudwick, Buzzfeed LGBT Editor for: This is what it’s like when your son dies from the chemsex drug GHB

Judges said this blended medical with the general creating a story with enormous heart. This powerful study of the dangers of chemsex contained drama, family loss and unflinching medical details — making it the perfect warning against GHB.

Sarah Boseley, health editor, The Guardian was Highly Commended for The big sleep: how the world’s most troubled country is beating a deadly disease

Judges said this was a compelling account, following a detailed investigation which exposed the scale of poor care, offering a better chance for those affected of proper redress. Shaun is almost unstoppable in his pursuit of patient safety.

Judges said this was a remarkable and original story. The statistics made it even more revealing. It was told in a cohesive narrative with telling contributions from family and experts. Powerful, compelling with good cinematography. 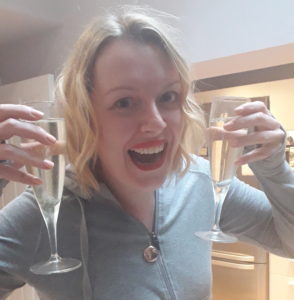 Helen was not able to get to London for the ceremony — she was literally stopped in her tracks after a tree fell into overhead cables near Carlisle, forcing her to turn back — but she did share the celebrations with a fizzing photo on social media.

She says: “I’m delighted to have picked up this award for the Herald.
It’s amazing to see a Scottish title recognised in a category with such strong competition from major national papers.
“The Tayside charity cash story lifted the lid on how easily health boards could misuse endowment funds and rightly led to scrutiny and changes in how they’re managed.
“Most of all I thank the people who trusted me enough to speak to me and help expose it.”

Lois Rogers, Caroline Wheeler and Gabriel Pogrund were Highly Commended for Gosport GP Jane Barton ‘responsible for hundreds of deaths’, which was published in The Sunday Times. 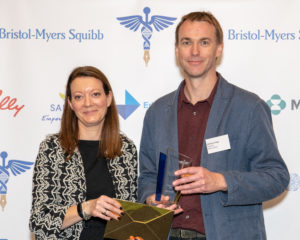 Freelancer Sophie Cousins was Highly Commended in our new Dr David Delvin Award forfreelance, Wherever you are, time is running out for treating gonorrhoea, published by Mosaic, The Wellcome Trust.

The Media Campaign of the Year Award which recognises excellence in PR was introduced last year to spotlight the communications teams and PR agencies who really understand what journalists want. It is supported by the Healthcare Communications Association but is the only award of its kind which is judged solely by journalists.

This accolade went to M&F Health for their work for The British Association of Sexual Health and HIV (BASHH) on Mycoplasma Genitalium (Mgen), a little known but common sexually transmitted infection.