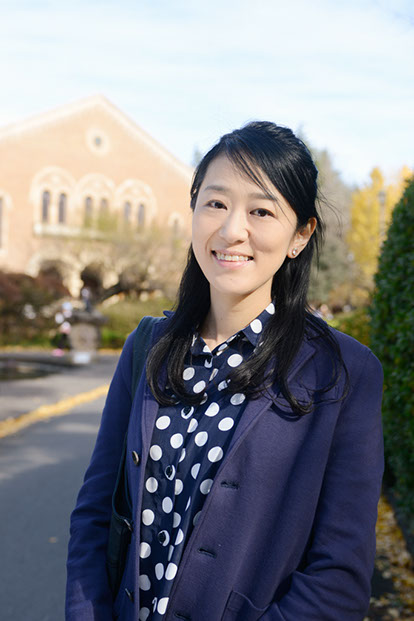 Dr Riko Muranaka has been awarded the international 2017 John Maddox Prize for promoting science and evidence on a matter of public interest, despite facing difficulty and hostility in doing so. A journalist and lecturer at Kyoto University, Dr Muranaka is recognised for her work championing the use of evidence in public discussions of the Human Papilloma Virus (HPV) vaccine.

The HPV vaccine is recognised by the scientific and medical community, and endorsed by the World Health Organisation as key to preventing cervical and other cancers. In Japan the vaccine has been subject to a national misinformation campaign to discredit its benefits, resulting in vaccination rates falling from 70% to less than 1%.

Dr Muranaka’s work to put the evidence for the safety of the vaccine clearly before the public has continued in the face of attempts to silence her with litigation and undermine her professional standing. In persisting, she has tried to ensure that a scientific account of the weight of evidence is available not only for Japanese families but for public health globally.

The John Maddox Prize, now in its sixth year, is a joint initiative of the leading international scientific journal Nature, the charity Sense about Science, supported by the Kohn Foundation, and is awarded to one or two people a year.

This year the prize received over 100 nominations from 25 countries. The judges were struck not only by the diverse circumstances in which nominees persevered with communicating science – which may indicate growing recognition among the international research community of the value of engaging in society – but by the often extreme and unsupportive conditions in which some do this. In many of the examples this year, and in previous years, the judges found a lack of institutional support, and in some cases that the behaviour of researchers’ institutions contributed to the problems they faced in public discussion.

As a result, this year the judges have taken the unusual step of drawing attention to the challenges tackled by other nominees (see summary below) and calling for researchers’ employers, government agencies, funders and scientific organisations to consider what action they should be taking to ensure that researchers are properly supported and the public continue to have access to their discussions about evidence.

The prize was announced at 7pm GMT at a reception in London on 30 November.

Accepting the prize Dr Muranaka said: “It is a great surprise and pleasure to be awarded such an honourable prize, one that commemorates a great editor and writer Sir John Maddox — a champion of evidence who believed in promoting sound science in the public interest even in the face of hostility. In terms of my own work, I simply cannot ignore dangerous claims that threaten public health. I want people to hear the truth, that’s the reason I continue to write and speak out.”

Sir Philip Campbell PhD, editor-in-chief, Nature, and judge said: “I congratulate Dr Muranaka on her achievements and for winning the award. In looking across the entries in this and in previous years, I would also like to emphasise the importance of institutions supporting their scientists who face hostility when standing up for evidence.”

Tracey Brown OBE, director, Sense about Science and judge said: “John’s insistence that we discuss the merits of research – publicly and without regard for fear or favour – could not have been more apparent in this year’s nominations. Our highly deserved winner Dr Muranaka has shown the courage and leadership that serves the public well but can put you in a lonely place. It is a place that too many science communicators will recognize and we all need to ask ourselves why that is and how to offer them greater solidarity.”

Colin Blakemore, professor of neuroscience & philosophy, School of Advanced Study, University of London and judge said: “Once again, the judges were so impressed by stories of the courage and resilience of scientists, medics and journalists who have struggled against prejudice and vested interests. Riko Muranaka stood out because of her long and determined efforts to inform the public, in Japan and the wider world, about the health benefits of HPV vaccination, despite vilification, litigation and threats to her professional standing.”

Lord (Martin) Rees of Ludlow OM FRS, University of Cambridge and judge said: “It is gratifying to see a more global encouragement of public engagement in research institutions, but these institutions need to shown serious thought on how to support researchers through their experiences at the rougher end of public debate, for example when investigating potentially vexatious complaints”.

Natasha Loder, The Economist and judge said: “Speaking truth against vested interests has never been more important. But it is difficult and sometimes comes at great cost. This year, the judges of the John Maddox Prize felt compelled to commend the efforts of a number of entrants. Dr Muranaka’s bravery and strength in fighting for public health stood out among this year’s brilliant applicants. She is fighting to ensure that Japanese girls have access to the HPV vaccine in the face of a successful misinformation campaign.”

Brenda Maddox, patron of the John Maddox Prize said: “My late husband John had an unusual combination of knowledge of science and eloquence of expression. Someone once asked him, ‘how much of what you print is wrong?’ referring to Nature. John answered immediately, ‘all of it. That’s what science is about – new knowledge constantly arriving to correct the old.’”

Dr Katsuyuki Kinoshita, chairman of the Japanese Association of Obstetricians and Gynaecologists, and nominator of Dr Muranaka for the 2017 John Maddox Prize said: “I heartily congratulate Dr Muranaka on her winning of the 2017 John Maddox Prize. Her courageous challenge in demonstrating the safety of the HPV vaccine, despite insult, litigation and attempts to undermine her professional status, epitomises the core spirit of the Maddox Prize. I believe this Prize will have a strong impact on the Ministry of Health, Labour and Welfare, in promoting the use of HPV vaccine in the Japanese society. Furthermore, I hope this award will help convince sceptical medical professionals and journalists of the great public benefit of this vaccine.”

The judging panel consisted of Professor Colin Blakemore FRS, Tracey Brown OBE (Sense about Science), Sir Philip Campbell PhD (Nature), Lord Rees of Ludlow OM FRS and Natasha Loder (the Economist). The judges sat in a personal capacity and the choice of the award does not indicate the view of any organisation they are associated with.

Sir John Maddox (1925-2009) was the editor of Nature from 1966 to 1973, and from 1980 until 1995, and laid the foundations for Nature as it is today, establishing a system of peer review and instituting a strong tradition of journalism. He was also a founding trustee of Sense about Science and the inspiration for many programmes of work including its now internationally established VoYS (Voice of Young Science) network.  This prize commemorates Sir John as a passionate and tireless communicator and defender of science. As a writer and editor at Nature for 22 years, he changed attitudes and perceptions, engaging with difficult debates and inspiring others to do the same. Sir John, in the words of his friend and former Nature news editor Walter Gratzer: “wrote prodigiously on all that was new and exciting in scientific discovery and technological advance, denouncing fearlessly what he believed to be wrong, dishonest or shoddy. He did it with humour and grace, but he never sidestepped controversy, which he seemed in fact to relish. His forthrightness brought him some enemies, often in high places, but many more friends. He changed attitudes and perceptions, and strove throughout his long working life for a better public understanding and appreciation of science.”

Researchers and communicators who contest poor scientific thinking face a diverse range of challenges in professional, public and political realms. This year, confronted with over 100 nominations for 95 people from 25 countries, the John Maddox Prize judges have taken the unusual step of drawing attention to a number of shortlisted nominees, with their permission – in order to highlight the extent of these challenges and to ask institutions to consider how their own actions contribute to or improve problems in the communication of science and evidence.

Ahmadreza Djalali
Dr Djalali shares information about improving hospitals’ emergency responses to armed terrorism and radiological, chemical and biological threats. An Iranian national and a resident of Sweden, Dr Djalali was arrested in April 2016 during a visit to Iran and accused of “collaboration with a hostile government”. Since the judging of the John Maddox Prize, Dr Djalali has been convicted and sentenced to death by a Tehran court.

Terry Hughes
Professor Hughes is a coral reef scientist and has led public debate in Australia about coral bleaching caused by climate change. He has experienced personal criticism from politicians, media outlets and the Australian tourism industry, but has continued to press for informed public debate.

Alain Braillon
Dr Braillon, a tenured senior consultant, was illegally sacked in 2009 by the French Department of Health for statements about research methodology, vested interests and public health threats concerning tobacco and alcohol.

Elena Cattaneo
Professor Cattaneo is pharmacologist and co-founding director of the University of Milan’s Centre for Stem Cell Research. Professor Cattaneo has become known in Italy for her relentless campaigning against the misuse of science, particularly in criticising controversial stem cell treatments.

Esther Crawley
Professor Crawley is a consultant paediatrician and a professor of child health at the University of Bristol investigating the treatment of chronic fatigue syndrome/myalgic encephalomyelitis. Professor Crawley works to promote a better understanding of CFS/ME in the face of complaints to her employer and professional bodies and accusations of fraud and misconduct.

Mark Cunningham
Dr Cunningham is a clinical and forensic psychologist in the US, who challenges longstanding misconceptions around the perception of capital offenders. He has faced public hostility and judicial resistance, as well as attacks by prosecutors seeking to limit or prevent his testimony in capital punishment cases. Despite all of this, Dr Cunningham continues to battle institutional resistance.

Richard Davies
Professor Davies is a petroleum geologist at Newcastle University, UK, who has worked to establish the potential environmental impacts of oil and gas extraction including the impact of fracking. In 2006 he led an international team to ascertain the cause of the eruption of the Lusi mud volcano, which led to 60,000 people losing their homes and was the result of a blowout caused by drilling for gas. The oil and gas company payed hundreds of millions of dollars in compensation. Professor Davies has also faced hostility from both sides of the fracking debate.

Leo Igwe
Dr Igwe has been a campaigner for rationality and critical thinking in Africa for many years. He has championed the use of evidence and scientific thinking to challenge the way accusations of witchcraft are levied and tested, which has brought him into conflict with many high-profile witchcraft believers. He has been arrested several times in Nigeria, as well as being subject to physical attacks.

Rosie Woodroffe
Professor Woodroffe at the Institute of Zoology, Zoological Society of London has faced consistent hostility for her work championing a scientifically-based approach to the control of bovine TB in relation to badgers. This includes her work highlighting that current UK Government policy does not follow the best scientific evidence.