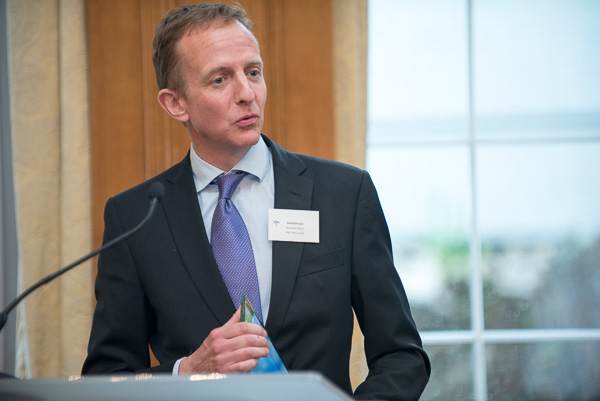 David Brown from BBC News at Six has won the inaugural MJA award for Outstanding Contribution to Health and Medical Journalism for a superb series of reports on mental illness.

To be considered for this, the ultimate MJA accolade, David had already picked up the award for Mental Health Story of the Year.

As Helen Birtwhistle, the Director of External Affairs at the NHS Confederation, who sponsored the Outstanding Contribution Award explained: “It was up to the judges to select the best of the best.” And they agreed that David’s  In the Mind series was “exceptional”.

The week-long series — which also won the award for Mental Health Story of the Year — explored the impact of mental illness on patients and their families and questioned clinicians, experts and politicians on the provision of care and resources.

Neither rain, referendum nor rail chaos could dampen the enthusiasm of the members and guests who managed to make it to the ceremony, hosted by consummate BBC broadcaster Nicholas Owen. At least one member had to bail out — literally — but won his three-hour battle to stop floodwaters inundating his home.

And the other winners are:

Charity Writer of the Year, for journalists writing for charity publications and websites, was won by Madeleine Bailey for the Multiple Scelorosis Society booklet, Understanding Progressive MS. Judges John Clare, Carole Stone and Kate Sidwell described it as “an outstanding example of how charity health information shoud be — accessible, powerful and informative”. Madeleine was not in the UK, so Christa Biervliet from the MS Society collected the award on her behalf.

Dr Dawn Harper admitted she and fellow judges Michele Simmons, chair the Guild of Health Writers and former chief of the Royal College of Nursing Peter Carter had an “incredibly difficult” job to decide the Blogger of the Year — which went to Rachel Clarke for her “clear, concise and coherent” commentaries.

Alex Matthews-King from Pulse, picked up Newcomer of the Year for his investigation into the incentives GPs are offered to reduce urgent referrals. This category was open to journalists with fewer than 36 months in medical or health journalism — and as Nicholas pointed out, Alex and the other shortlisted entrants, Roisin Dervish-O’Kane and Victoria Parsons have already achieved an enormous amount in their short time in journalism.

Regional Reporter of the Year was won by Jonathan Gibson from BBC Inside Out West Midlands, with a high commendation for Sam Blackledge of the Plymouth Herald.

Mosaic won Website of the Year, with a commendation for Guardian Healthcare Professional Network.

Steve Silberman, author of NeuroTribes sent a video “thank-you, thank-you, thank-you” from the United States after winning Health Book of the Year, beating tough competition from Helen Pearson, who was highly commended for The Life Project.

Professor Klaus Dugi, the UK Managing Director and Medical Director of Boehringer Ingelheim announced the Broadcast Journalist of the Year — Rowan Deacon from BBC Two for his “powerful” piece How to Die. Thomas Moore of Sky News was highly commended for his report on a clinical trial of treatment to cure paedophiles.

One of the most popular wins of the evening was John Illman’s victory in the Feature of the Year for a specialist audience for his “superbly written” piece, The danger in a second opinion, published in the British Journalism Review. Suzi Collett made the presentation on behalf of sponsors MSD. Commendations went to Linda Geddes; and Karen Lobban and Stephanie Jones-Berry.

Feature of the Year for a general audience, sponsored by Novo Nordisk, was won by Kate Kelland, from Reuters. Judges also commended Mary-Ann Ochota, BBC Radio 4.

Shaun Lintern, from Health Service Journal, won the award for News Story of the Year, specialist audience, for “a really good read” built on   “excellent investigative journalism”. The presentation was made by Stefanie Holman, Corporate Communications Manager of Sanofi Genzyme.

Steve Connor of the Independent was presented with the trophy for News Story of the Year, for a general audience by Professor Dugi from Boehringer Ingelheim, the principal awards sponsors.  Laura Donnelly of the Telegraph and Peter Blackburn of the Nottingham Post were both highly commended.

Case Study Story of the Year, is a new category, and attracted more than 40 entries. The winner, Rob Osborne from ITV, had been roped into to cover that other event, so MJA chair Lawrence McGinty accepted the trophy on his behalf from Louisa Stevenson, Head of Communications at Lilly UK. Qasa Alom, BBC One Inside Out West Midlands was highly commended.

Science Explained, sponsored by Astellas, was won by Alok Jha from ITV News, for his piece, Will immunotherapy become a game-change in treating cancer?

And Editor of the Year went to Catherine de Lange of New Scientist, who accepted the award from Thomasine Kamerling, Head of Corporate Affairs at Roche. Pulse editor, Nigel Praities — who pronounced the evening “the best ever MJA Awards” was highly commended.