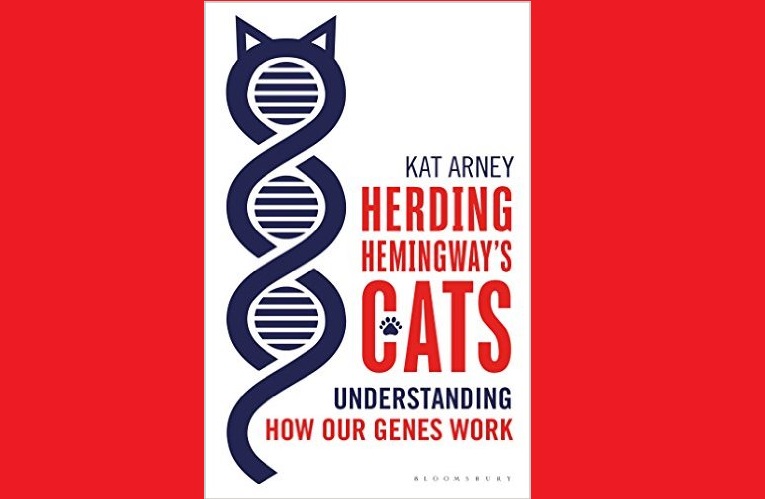 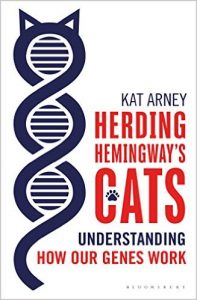 A review by Geoff Watts

Some authors favour titles that spell out their wares unambiguously. A Field Guide to the Birds of Britain and Europe, say; no doubting what that’s about. But what to make of Herding Hemmingway’s cats? Author Kat Arney belongs to the teasing, get-them-guessing school of title choice. Not that you need wait long for all to be revealed. The book’s sub-title is immediately illuminating: “understanding how our genes work”. Ah, yes… Well, a qualified “ah”, at least; if you want to understand the genesis of the full title, read the book.

In fact, read it anyway. If a chatty, breezy, relatively painless and non-academic (“let’s drop the ‘nature versus nurture’ crap”; “Mary-Claire King is “one of the most kick-ass geneticists of her generation”) introduction to our 20,000 or so coiled up strings of useful DNA is what you’re after, this is for you.

Arney enthuses about the wonders of our genes, but without falling into the trap of suggesting that to understand them is to understand everything about health and disease and why we are as we are. The chapter on epigenetics reveals the severe limits to our current grasp of this particular aspect of inheritance, and identifies some of the current debates about it. Other sections underline the extraordinary complexity of the genome, and the stack of uncertainties that confound attempts to make direct or straightforward correlations between genotype and phenotype: correlations that are proving far harder to pin down than an earlier generation of geneticists might reasonably have hoped.

Metaphors are an essential ingredient in most science writing, and here Arney deploys them with enthusiasm. That said, she does have a tendency – as with the genome-as-a-cookery-book metaphor, or the video game parallel used to illustrate the development of the fertilised egg into an adult organism – to push them to the limit.

The informal and journalistic approach that Arney…or, to maintain her own casual idiom, Kat…the approach that Kat uses to recount some of her material encompasses thumbnail sketches of meetings with several of her quoted experts. This offers scope for casual references to their appearance, behaviour and lifestyle. The molecular biologist Mark Ptashne, we read, lives in a “swanky Fifth Avenue apartment” with a grand piano, a cat called Zebby, and some art works by Matisse. Biochemist and Nobel Prize winner Rich Roberts used his share of the award money to build a croquet lawn in his garden. The scientists emerge as people with personalities. Refreshing.

I was intrigued to learn – if Kat’s right about this – that when Francis Crick put forward his infamous and not quite accurate Central Dogma of Molecular Biology (that DNA makes RNA makes protein) he used the word dogma without knowing its precise meaning. He wasn’t intending to be that, well, dogmatic.

Given what I take to be the audience she’s aiming for, I do wonder if Kat hasn’t provided a smidgeon too much fine scientific detail in places. Genetics, like immunology, is a topic in which detail, fascinating though it is, can blur the broader picture. Indeed, towards the end of this thoroughly researched book you begin to sense that the author herself might be feeling overwhelmed by the complex uncertainties she’s revealed. As she comments at one point, “the data and computational analysis required to make sense of the human genome and how it works becomes mind-boggling.” But no. With just a couple of paragraphs to go before the end of the book her confidence in the future comes roaring back – boosted it would seem by the recent invention of CRISPR and Cas, the gene-editing techniques that now offer a simpler, quicker and more precise way of intervening experimentally. “As researchers become more adept at carving up the genome with their editing tools, we’re getting closer to…finally tying everything together.” Relief is in sight.

Imbibe all this and you’re getting a real insight into some of the current controversies in genetics. In between the more colourful passages – and sometimes mixed in with them – Kat homes in on some of the most fundamental mechanisms of genetic control. And she’s always eager to trot out the probing question. How can strings of DNA two metres in length be packed into such small spaces, for example?

I said at the beginning that this is a relatively painless way of getting grips with genetics. Kat may have taken some of the struggle out of the process, but not all. Don’t kid yourself that this (or any other) book will give you genetics on a plate. You, dear reader, will still have to put in your two penn’orth of concentration.